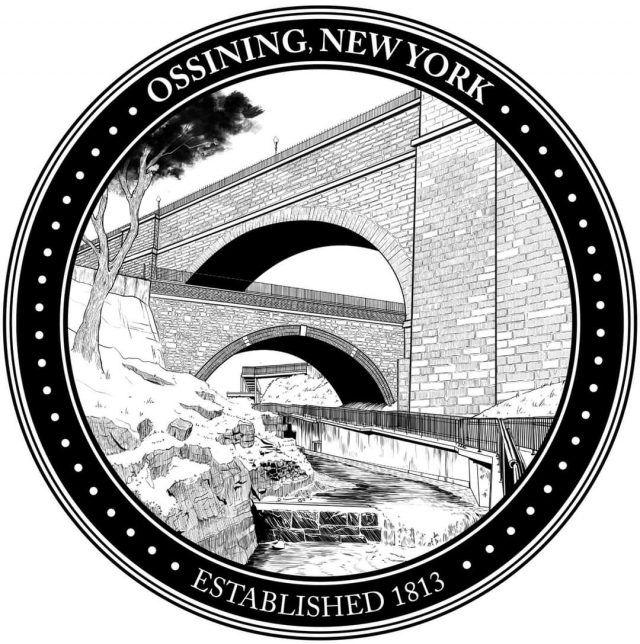 In March I met up with artist Daniel Aviles on the Sing Sing Greenway and we took this selfie. We could already sense big changes afoot. Days later schools closed and stay-at-home orders were issued. Among the many things that did not happen because of COVID-19, was a year of events anticipated to commemorate the restoration of the Broadway Bridge.

Thankfully, one very special project that was able to come to fruition is this beautiful commemorative seal. Daniel is an Ossining High School graduate, who was recommended as an artist who might be perfect for capturing an updated pen and ink image of Ossining’s double arch, including the greenway below.

The point where the Old Croton Aqueduct crosses over the Broadway Bridge is an iconic image frequently used to symbolize Ossining. We learned from former Village Historian Dana White that the double arch bridge is “unique in New York State. Two masonry arches, a bridge within a bridge, at two opposing angles to each other”.

Her presentation during the Broadway Bridge ribbon cutting follows.

The commemorative seal unveiled today reflects the recent historically evocative upgrades to the Broadway Bridge that were completed early this year, as well as our beloved Sing Sing Kill Greenway that opened as a pedestrian walkway in 2016.

The commemorative seal illustrates layers of narratives about Ossining. We are a community that honors local history as we invest in our engineering infrastructure. When faced with a necessary encasement of the sanitary sewer line that runs through the Sing Sing Kill, we made design enhancements to create a pedestrian greenway in a gorge of natural beauty winding through our historic downtown.

The Old Croton Aqueduct that forms the upper arch was constructed largely by immigrants to carry water to New York City nearly two centuries ago, and many of those immigrants settled in Ossining.

Today’s rendering is from a local artist, the son of a new generation of immigrants, who in one small drawing has captured hundreds of years of innovation and connection in the heart of our village.

Please join me in congratulating Daniel Aviles on a beautiful depiction of our iconic landmark.