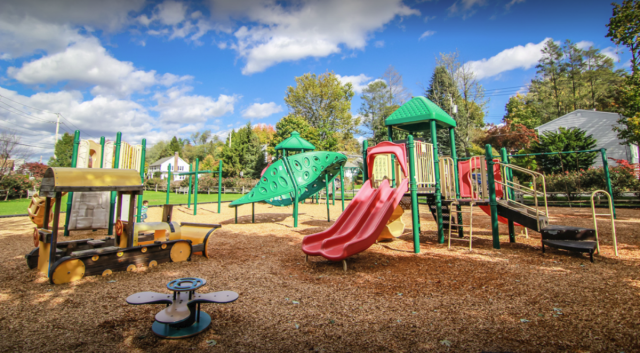 The Town of Ossining maintains over 130 acres of parkland.

Arthur J. Jones Park – Sherman Place is one of them.

In 2005, a vacant lot off Park Avenue in Ossining was transformed into an oasis encircled by a wall of rose bushes and dotted with maple trees and teak benches.

The Arthur J. Jones Park, which includes a playground and a half-basketball court, was built by some 400 volunteers in a matter of two days to honor the Ossining resident killed in the Sept. 11 terrorist attacks.

“I didn’t know him personally but I met a lot of his neighbors who said he was the type of guy that when it snowed he would shovel people’s driveways and sidewalks,” said Henry Atterbury, Ossining’s superintendent of parks and recreation. “He was a very community-oriented person.”

Jones’ wife, Carol, came up with the idea to build the park, Atterbury said. She held a fundraiser at the former Parise’s Steakhouse, he recalled, collecting $90,000 toward the endeavor. Carol Jones, who has since moved out of Ossining, could not be reached for comment.

“I was amazed that they could raise that kind of money in one night,” Atterbury said. “But there were a lot of people who loved and cared about him.”

The site, which was officially dedicated parkland in 2006, at first received resistance from neighbors who were concerned that a park would attract “undesirables,” Atterbury said.

“But as it turned out, it’s a really great neighborhood park,” he said. “A real tribute.”

For questions or further information about any of the programs and services offered, please call the Recreation & Parks Department Monday – Friday, 9:00 a.m. – 10:00 p.m.