In the late 1920s, a handful of Ossining’s leading citizens saw the need to preserve and celebrate the town’s unique history. A museum would be just the thing. But maybe, they said, a historical society should come first. In 1931 the first meeting was held at the home of Mrs. John “Fanny” Kane, a wealthy civic leader and philanthropist whose roots went deep in Ossining. The Democratic Register applauded the creation of the Ossining Historical Society, writing that “In the tales of yesteryear and the exhibits of historical importance will lie pleasure for many.” Fanny Kane became its first president.  Subsequent meetings were held at the Ossining Woman’s Club on Highland Avenue, which Fanny had also founded, along with the local chapter of the Daughters of the American Revolution. 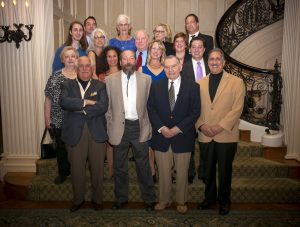 Through her influence and popularity, Fanny made the Historical Society a success. As Ossining residents began to donate items to the museum, the growing collection needed a place to be stored and displayed. From 1935 to 1970, a museum occupied the third floor of the Washington School on Croton Avenue. The collection grew from one room to three. In 1970, the collection moved into its current home at 196 Croton Avenue, the Richard Austin house, built in 1878 and listed on the National Register of Historic Places.

Headed by a series of energetic presidents, the OHSM has strived to nurture and protect Ossining’s architectural and cultural heritage, erecting historic markers (such as that for the Union Hotel outside Lucy’s Pizza) and hosting tours of historic homes. The museum continues to gladly accept old photographs, books, artwork, family papers, and memorabilia that might otherwise not have a home.

Now 600 members strong, the OHSM remains a precious repository for those parts of Ossining lost to fires, bulldozers, and wrecking balls. Highlights of the permanent collection include an 1830 landscape by Hugh Reinagle; a large display of packaging, brochures, and photographs from the Brandreth Pill Works; and the bell from the locomotive that pulled Lincoln’s death train through Sing Sing and other river villages on its way to Springfield, IL. The War Room houses artifacts from every conflict from the Revolutionary War to Desert Storm. There are newspapers dating from 1818, a map room, and extensive Sing Sing Prison files.

To explore the museum’s rooms and collections is to be moved by our village’s past and inspired for its future. Contact us to make an appointment to visit.