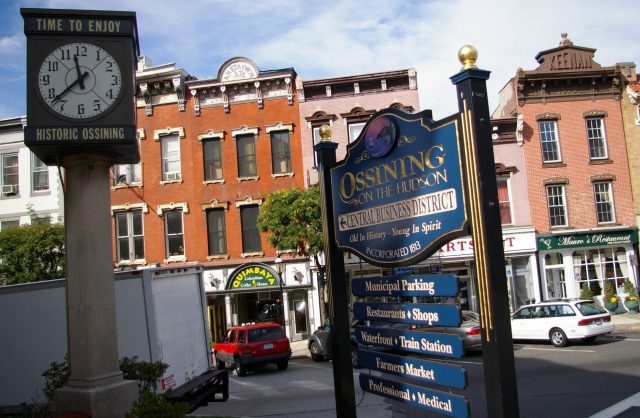 The Downtown Ossining Historic District is located at the central crossroads of Ossining, New York, United States, and the village’s traditional business district known as the Crescent. Among its many late 19th- and early 20th-century commercial buildings are many of the village’s major landmarks—three bank buildings, four churches, its village hall, former post office and high school. It was recognized as a historic district in 1989 and listed on the National Register of Historic Places, as one of the few downtowns in Westchester County with its social and historical development intact.

One of its contributing properties, the First Baptist Church of Ossining, had already been listed on the Register in 1973. The Old Croton Aqueduct, a portion of which passes through the district, was listed on the Register the following year and designated a National Historic Landmark in 1992. Among the architects represented in the district are Robert W. Gibson, Isaac G. Perry and James Gamble Rogers.

Ossining began at the crossroads in the late 18th century, and continued to prosper as industry developed along the nearby shore of the Hudson River, along with Sing Sing prison and the railroad. It soon became Westchester’s first incorporated village. The downtown area was fully developed by then, but two events later in the century reshaped it. The aqueduct was built through the area to carry water to New York City, requiring the demolition of some buildings. In the early 1870s several fires destroyed other buildings; most that remain thus date from that period to the early 1930s.

Later in the 20th century the buildings on the south side of Main Street were demolished as part of urban renewal efforts. Some of the oldest buildings on the other side were also lost in another fire. Little has been built to replace them, and the village has only recently begun serious redevelopment efforts although the area has become home to restaurants and home-furnishings stores that cater to the area’s Latin American and Portuguese immigrant populations. A comprehensive plan adopted in the early 21st century has led to new zoning for the area meant to encourage mixed-use development. It also called for the expansion of the district to include Highland Cottage and some other buildings; this was granted in 2013.