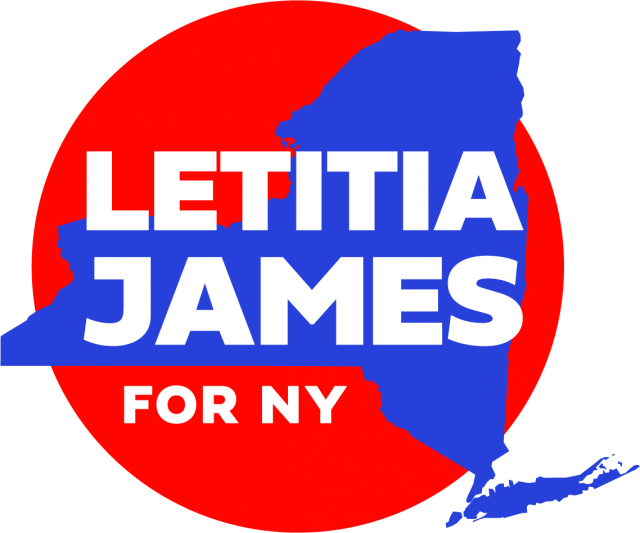 New York Attorney General Letitia James today announced her historic candidacy for governor of the state of New York. The announcement, made in a video and on her website, highlighted the vast work that Attorney General James has done across the state throughout her career and lays out why she is the change that New York needs.

“As I hae traveled all around New York state, I have witnessed too many working families struggling to make ends meet, and it is clear that the status quo just will not do,” said Attorney General James. “New Yorkers need a governor who is not afraid to stand up to powerful interests on behalf of the vulnerable. Throughout my career, I have taken on big forces and New Yorkers know I will never back down when it comes to fighting for them. Today, I am proud to announce my candidacy for governor of New York so we can bring transformational change that uplifts all New Yorkers.”

Letitia James is the 67th Attorney General for the state of New York. She is the first woman elected attorney general in New York and the first woman of color to hold statewide elected office in New York. As attorney general, she serves as the top law enforcement officer in the state and has taken on the most powerful companies and individuals in the country. When she is governor, Letitia James will become the first Black woman governor in United States history.

During her time as attorney general, Letitia James has:

Prior to serving as attorney general, Letitia James was the Public Advocate for the City of New York and became the first woman of color to hold citywide elected office in New York City. As public advocate, she served as a watchdog over New York City government agencies and as an advocate for the city’s most vulnerable communities. She transformed the public advocate’s office to be a formidable engine for change.

Her office handled more than 32,000 constituent complaints and passed more legislation than all previous public advocates combined, including a groundbreaking law that banned questions about salary history from the employment process to address the pervasive gender wage gap. She successfully took on the gun industry by pushing New York City’s largest pension fund to divest from gun and ammunition retailers. She fought in court on behalf of children and families on issues including children in foster care, children with disabilities, and tenant protection. She also successfully represented an unaccompanied immigrant minor after he fled danger in Honduras and was facing deportation. As a former public defender, then-Public Advocate James helped him secure a green card so he could stay in America.

Prior to serving as public advocate, Letitia James represented the 35th Council District in Brooklyn in the New York City Council for ten years. As a council member, she passed the Safe Housing Act, legislation that forced landlords to improve living conditions for tenants in New York City’s worst buildings. She helped shed light on the corruption behind the Office of Payroll Administration’s CityTime contract, a scheme that cost New York City more than $600 million. She sued to prevent elected officials from changing their own term limits without any public involvement and against the public’s will. She also pushed through a revolutionary recycling package that included expanding plastic recycling, a new clothing and textile recycling program, and increased access to recycling in public spaces.

Before her election to the City Council, Letitia James served as head of the Brooklyn Regional Office of the New York Attorney General’s Office. She resolved hundreds of consumer complaints and investigated predatory lenders who preyed on first-time homebuyers. She assisted the Civil Rights Bureau in its investigation of the NYPD’s stop-and-frisk policy and cracked down on firms engaged in deceptive business practices including violations of human rights, environmental laws, and scams targeting immigrants.

Letitia James began her career as a public defender at the Legal Aid Society. A proud Brooklynite, she is a graduate of Lehman College and Howard University School of Law, and she studied at Columbia University’s School of International and Public Affairs.