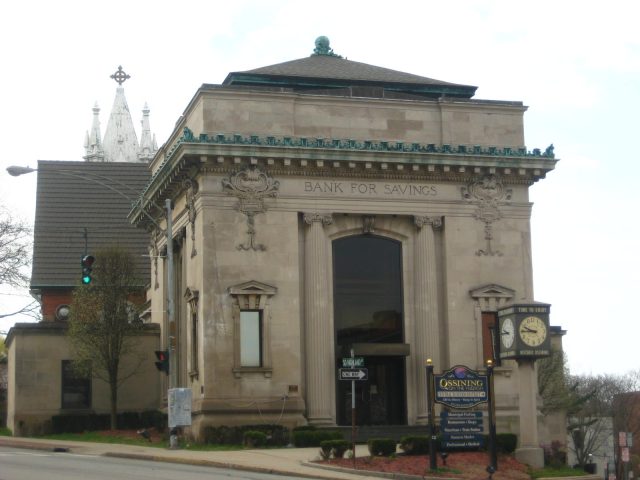 After decades of vacancy, a historic bank building may have a new purpose — Ossining’s new food hall.

The village of Ossining recently found a new buyer for the Bank of Savings at 200 Main Street, which sits out on the triangular point between Main Street and Route 9.

Wulf Lueckerath of Corinthian Group, LLC plans to renovate the vacant bank. The deal should close this month and renovations are expected to begin in September.

Restaurants might include anything from Asian cuisine to coal-fired pizza to smaller Mexican platters. Lueckerath said the idea came from a growing trend across the U.S.

“You go to New York City and other parts of the United States — from Seattle to Boston — there have been a lot of these food halls or higher-end stores,” he said. “So that’s what were trying to replicate.” 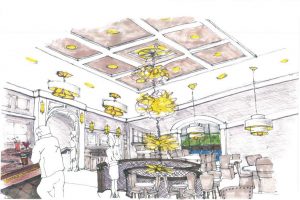 During the day, families could relax at a cafe, culinary students could train in a kitchen in the basement and kids could enjoy a pizza or ramen under the sun on an outdoor deck, Lueckerath envisions. By night, cocktail bars, restaurants and community-shared kitchens would serve the Ossining nightlife.

“It’s more of a sense of community, something the community can share. It serves anyone from kids to adults,” Lueckerath said.

The food hall, including an outdoor seating area, would be on the first floor, which is about 3,100 square feet. A restaurant with a cocktail bar would be on the on the 3,758-square-foot second floor. The 1,634-square-foot basement would host two to three kitchens and a bar with access from Main Street. A new elevator and winding staircase would connect the three floors. He estimates the renovations would cost $1.5 million.

An particularly fun idea includes turning the vault into a wine or cheese store, and there are plans for a rooftop deck in phase two.

“We’ve gotten some interest from different vendors,” said Lueckerath, who lives in Mount Kisco and holds citizenship in Germany and Japan. “But we’re waiting to bring people through the building when we’ve cleaned out the building.” 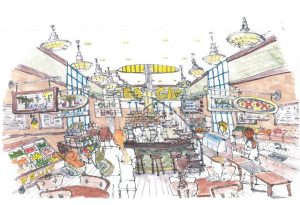 Village Mayor Victoria Gearity said the food hall, which lies at the gateway to the town, is a “incredibly positive opportunity” for the village. She recused herself from the village’s sale with Lueckerath to avoid the appearance of impropriety. As a partner in a brewery and taproom planned on Spring Street, the mayor’s husband, Eric Gearity, is renting out a space owned by Lueckerath’s developer firm, Corinthian Group, LLC.

“It’s a remarkable and historical building that has undergone some amount of disrepair, and we had hoped that it would be given new life,” she said. “We are very excited to have it back on the tax roll.”

The bank, listed in the village’s National Register of Historic Places, is Ossining’s only commercial example of the Beaux-Arts style, and it had been vacant for two decades. Built in 1908, it stopped operating as a bank in 1983. The village bought it in 2004. Lueckerath’s proposal say he will decorate the historic building with artwork that highlights Ossining’s history.

Victor Febre, owner of Pine and Oak Bistro across the street from the bank, says competition is a good thing.

“We need more restaurants in the downtown area, it creates more business,” he said.

“We are very excited to start the project, to make it successful, I think it will make a very good addition,” Lueckerath said. “I think it would be the start of more restaurants and higher-end stores coming to Main Street. It’ll bring more people, so people will walk around more on the streets.”